1973 Billy Preston – Everybody Likes Some Kind Of Music 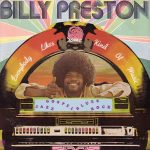 Everybody Likes Some Kind Of Music is the eighth studio album by American musician Billy Preston. It was released in September 1973 on A&M Records.

The album includes the instrumental “Space Race”, which was released as a single and was a sequel of sorts to Preston’s 1971 hit “Outa-Space”. The instrumental proved popular enough that the musical variety show American Bandstand used it as the song for its mid-broadcast break from the mid-1970s until the show completed its run in 1989. The album also features of cover of Bob Dylan’s “It’s Alright Ma (I’m Only Bleeding)”. “How Long Has the Train Been Gone” was released as a single, as was “You’re So Unique” the following year.

“Do You Love Me” was the basis for the Rolling Stones’ “Melody” on their 1976 Black and Blue album, and on that album the track is given the credit “inspiration by Billy Preston”.

Stylistically, the album covers many types of music including soul, rock, gospel, jazz, R&B and even classical. As such, it is perhaps Preston’s most musically diverse record.

The song “Space Race” was featured on the BBC’s The Old Grey Whistle Test on 30 October 1973. The song was the first time that Preston had used an ARP synthesizer; he had written the tune whilst coming to grips with the technology.