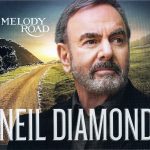 Melody Road is Neil Diamond‘s debut album as an artist signed to Capitol Records. His 32nd studio album, it was the first album of original music Diamond has recorded since 2008’s well-received Home Before Dark, which debuted on the US album charts at #1. It was produced by Don Was and Jacknife Lee.

After 40 years recording for Columbia, Diamond signed with Capitol in early 2014. At the same time, his back catalogue was moved to Universal Music Group, Capitol’s parent company. Capitol released Diamond’s 1980 soundtrack album for The Jazz Singer.

On September 8, 2014, six of the tracks from Melody Road were premiered at the Capitol Records studios in Hollywood, CA at a listening party for a small group of music industry executives and journalists. Following the event, Billboard wrote that the album is “rich in orchestration that retains the dark rustic qualities of his last two studio albums of original material, 12 Songs and Home Before Dark. Of the songs, the article stated that “‘Something Blue’, the most commercial of the songs played Monday, has the classic Diamond mid-tempo lilt; the ballads ‘The Art of Love’ and ‘(Ooo) Do I Wanna Be Yours’ offer springboards for Diamond’s still-potent voice; and ‘Seongah and Jimmy’ is an eyewitness account of a romance between a woman from Korea and a man from Long Island.” The Wall Street Journal wrote that “The Art of Love” is a “tender offering from Diamond, who at age 73, hasn’t lost that ability to convey a wide swath of emotions in just four minutes.”