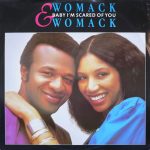 “Baby I’m Scared Of You” is the second single from the Womack & Womack album Love Wars. It was released in 1984 and reached #72 in the UK Charts

Love Wars is the 1984 debut album by musical duo Womack & Womack. The album, described by Chris Rizik of Soul Tracks as “a critical favorite”, charted at number 34 on the Billboard Top R&B/Hip-Hop Albums chart. In his review of the album, music critic Robert Christgau praised husband Cecil Womack and wife Linda Womack […]