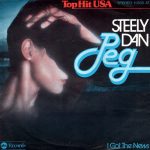 “Peg” is a song by American rock group Steely Dan, first released on the band’s 1977 album Aja. The track was released as single in 1977 and reached number 11 on the US Billboard chart in 1978 and number eight on the Cash Box chart. With a chart run of 19 weeks, “Peg” is tied with “Rikki Don’t Lose That Number” and “Hey Nineteen” for being their longest-running chart hit. In Canada, “Peg” spent three weeks at number seven during March 1978