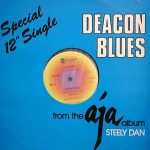 “Deacon Blues” is a song written by Walter Becker and Donald Fagen in 1976 and recorded by their group Steely Dan on their 1977 album Aja. It peaked at number 19 on the Billboard charts and number 17 on the U.S. Cash Box Top 100 in June 1978. It also reached #40 on the Easy Listening chart. In Canada, it peaked at #14, a position it occupied for two weeks, and #20 Adult Contemporary.