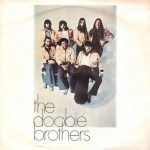 “It Keeps You Runnin'” is a song by the American rock band The Doobie Brothers. The song was written by band member Michael McDonald, and served as the third single from their sixth studio album Takin’ It to the Streets. It was also covered and released as a single by Carly Simon.

The Doobie Brothers version was featured in the 1994 Oscar-winning film Forrest Gump, and was included on the film’s multi-platinum selling soundtrack album.

The song was also featured in the soundtrack of the 1978 film FM.

Takin’ It to the Streets is the sixth studio album by American rock band The Doobie Brothers. The album was released on March 19, 1976, by Warner Bros. Records. It was the first to feature Michael McDonald on lead vocals. Tracks 1  Wheels Of Fortune (Patrick Simmons; Jeff Baxter; John Hartman) 4:57 2  Takin’ It […]