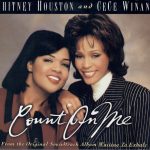 “Count on Me” is a song recorded by American singers Whitney Houston and CeCe Winans. It is an uplifting song about leaning on a friend for support when needed. Released in early 1996, the song was the fourth single from the soundtrack album of the motion picture Waiting to Exhale, and the second single by Houston released from that album and its soundtrack. “Count on Me” became Winans’s highest-charting single on the US Hot 100, peaking at #8. It was certified gold in the U.S.

Waiting To Exhale: Original Soundtrack Album is a soundtrack for the film of the same name, released on November 14, 1995 by Arista Records. Written and produced by Babyface, the soundtrack features appearances by some of the biggest names in the industry, including Whitney Houston, Toni Braxton, TLC, Brandy, Aretha Franklin, Chaka Khan, Faith Evans, […]