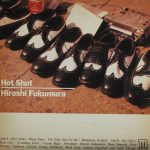 Hot Shot is the fifth solo album by Hiroshi Fukumura, released in 1985 on Morning.

Fukumura played with Sadao Watanabe for much of the 1970s, excepting a period where he studied in the United States at the New England Conservatory of Music. He led his own quintet, which included Shigeharu Mukai as a sideman, for a studio recording and a live release in 1973. He was a member of Native Son and also worked with Takehiro Honda, Gil Evans, Hidefumi Toki, and others.

3 The Only One For Me