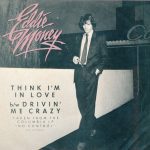 “Think I’m in Love” is a 1982 hit single by American rock singer Eddie Money from his album No Control. The song was written by Money and Randy Oda (who is perhaps best known otherwise for his collaborations with former Creedence Clearwater Revival member Tom Fogerty). The song was released as a single and reached #16 on the Billboard Hot 100 and hit #1 on the Billboard Top Tracks chart.

The song was Money’s first Top 40 hit in several years, and sparked a brief comeback for the artist. The song remains a popular track, and gets frequent airplay on classic rock radio stations.

No Control is the fourth studio album by American rock musician Eddie Money. The album was released on June 11, 1982, by Wolfgang Records and Columbia Records. It was Platinum-certified in 1987, and contains the hits “Think I’m In Love” and “Shakin’.” Tracks 1  Shakin’ (Eddie Money; Elizabeth Myers; Ralph Carter) 03:08 2  Runnin’ Away […]