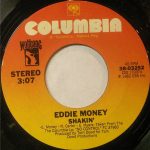 “Shakin'” is a song by American rock singer Eddie Money from his Platinum-certified album No Control, released in 1982. It was co-written by Money, Elizabeth Myers, and Ralph Carter, and released as a single, reaching #63 on the Billboard Hot 100 chart and #9 on the Mainstream Rock Tracks.

The video for the single featured actress/model Patricia Kotero, better known as Apollonia, as the female doing the “shakin”. She would later go on to co-star in the film Purple Rain.

No Control is the fourth studio album by American rock musician Eddie Money. The album was released on June 11, 1982, by Wolfgang Records and Columbia Records. It was Platinum-certified in 1987, and contains the hits “Think I’m In Love” and “Shakin’.” Tracks 1  Shakin’ (Eddie Money; Elizabeth Myers; Ralph Carter) 03:08 2  Runnin’ Away […]