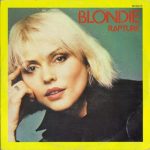 “Rapture” is a song by the American pop/rock band Blondie from their fifth studio album, Autoamerican (1980).

In January 1981, “Rapture” was released as the second and final single from the album. The song became their fourth and last single to reach number one on the U.S. Billboard Hot 100 chart, where it stayed for two weeks. It was the first number-one song in the U.S. to feature rap vocals. The song peaked at number four in Australia and number five in the United Kingdom.

“Rapture” is a combination of disco, funk, and hip hop with the rap section forming an extended coda.

Autoamerican is the fifth studio album by the American rock band Blondie. It was released in November 1980 and reached No. 3 in the UK charts, No. 7 in the US, and No. 8 in Australia. The band released two singles from this album, “The Tide Is High” and “Rapture”. “The Tide Is High” hit Number One in […]