1977 Van Morrison – A Period Of Transition 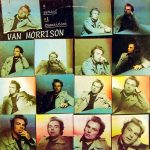 A Period Of Transition is the ninth studio album by Northern Irish singer-songwriter Van Morrison, released in 1977. It was his first album in two-and-a-half years, largely forgotten or overlooked by most casual fans. At the time of its release it was received with some disappointment by critics and fans: “Most were hoping for a work of primeval vocal aggression that would challenge the emerging élite of Morrison pretenders, whose ranks included Bruce Springsteen, Bob Seger, Phil Lynott, Graham Parker and Elvis Costello.”  However, the album is still notable for several major compositions, including “Heavy Connection”, “Flamingos Fly”, “The Eternal Kansas City” and “Cold Wind in August”.

Morrison had appeared in The Last Waltz with Mac Rebennack (Dr. John) who was a co-producer on this album as well as playing keyboards and guitar.

1 You Gotta Make It Through The World

2 It Fills You Up