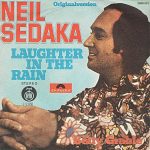 “Laughter In The Rain” is a song composed and recorded by Neil Sedaka, with lyrics by Phil Cody. It includes a 20-second saxophone solo by Jim Horn.

The song was released on Elton John’s Rocket Records.

After hearing a version of “Laughter in the Rain” by singer Lea Roberts on the radio several weeks before the planned release of his single, Sedaka phoned Elton John to have MCA Records rush the Sedaka version to release within five days.

The opening chord of the chorus was based on that used by John in “Goodbye Yellow Brick Road”, which Sedaka has described as a “drop-dead chord.” He combined that with a pentatonic melody inspired by Aaron Copland. Cody claims to have written the lyrics in about five minutes after smoking marijuana and falling asleep under a tree for a couple of hours.

Sedaka’s Back is a compilation album by American singer-songwriter Neil Sedaka. The record, composed of selections from his previous three albums, which had been released only in the UK, was released on Elton John’s label, The Rocket Record Company, in 1974. Three singles were released from this album: “Laughter in the Rain” (a #1 hit), […]