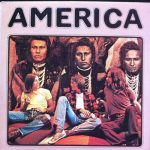 The album went to No. 1 on the Billboard album chart in the United States and stayed there for five weeks. It produced two hit singles; “A Horse with No Name” spent three weeks at No. 1 on the Billboard singles chart in 1972 (it peaked at No. 3 on the Adult Contemporary chart), and “I Need You” hit No. 9 on the Billboard singles chart and No. 7 on the AC chart. Several other songs received radio airplay on FM stations playing album tracks, including “Sandman” (long-rumored to be about the United States Navy VQ-2 air squadron formerly based in Rota, Spain) and “Three Roses”. The album was certified platinum by the RIAA for sales in excess of one million units in the U.S.