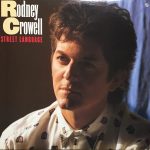 Street Language is the title of the fourth studio album released by American country music artist Rodney Crowell. It was released in 1986 by Columbia Records, his first release on that label. It peaked at #38 on the Top Country Albums chart. The songs, “Let Freedom Ring”, “When I’m Free Again”, “She Loves the Jerk” and “Looking for You” were released as singles but they all failed to chart within the top 20. This album was co-produced by R & B artist Booker T. Jones and features a blend of soul and country music.

In 1984, Crowell recorded what was to be a new album for Warner Bros., Street Language. That album, a pop-sounding effort co–produced by David Malloy, was rejected by Warner Bros, and was never released. The label requested a more Nashville-friendly record, but Crowell negotiated a release from his contract and moved to Columbia Records. He then he brought in Booker T. Jones as co-producer and re-recorded a more rock and roll/electric-sounding Street Language in 1986.

The song “Looking for You” was co-written with Crowell’s then wife, Rosanne Cash. “She Loves the Jerk” was written and first recorded by John Hiatt in 1983 and was included on his album, Riding with the King. It would later be covered by Elvis Costello.

4 She Loves The Jerk

5 When The Blue Hour Comes