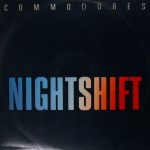 “Nightshift” is a 1985 song by the Commodores and the title track from their eleventh album of the same name. The song was written by lead singer Walter Orange in collaboration with Dennis Lambert and Franne Golde, as a loving tribute to soul/R&B singers Jackie Wilson and Marvin Gaye, both of whom died in 1984. The first verse mentions Gaye’s song “What’s Going On”, while the second verse mentions Jackie Wilson’s “Baby Workout” and “(Your Love Has Lifted Me) Higher and Higher”.

The song was released as the album’s first single on January 31, 1985 by Motown Records in the USA.

“Nightshift” was recorded in 1984, and became the Commodores’ first hit after Lionel Richie’s departure from the group. It became their biggest hit after Richie’s departure, peaking at number three for the week of April 20 on both the Billboard Hot 100 and UK Singles Chart,and rising to number one on the Hot Black Singles chart; the single also became a success on the Adult Contemporary and the Hot Dance Music/Maxi-Singles Sales charts in the first half of that year.

Although the band was against the label decision to release it as a single, it won a Grammy Award in 1985 for Best Vocal R&B Performance by a Duo/Group. The song features a lead vocal from drummer Walter Orange, who had sung lead years earlier on “Brick House”. Lionel Richie’s replacement, J.D. Nicholas, sings the second verse and then Orange and Nicholas share lead vocals on the remaining choruses.

Nightshift is the 11th studio album by the Commodores, released by Motown Records on January 15, 1985. It was the group’s last album on the Motown label before switching to Polydor. Nightshift is the Commodores’ second album without Lionel Richie, who left the band in 1982, and their last album with their original bass guitarist Ronald LaPread. Their previous album […]