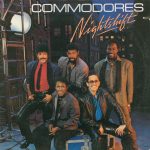 Nightshift is the 11th studio album by the Commodores, released by Motown Records on January 15, 1985. It was the group’s last album on the Motown label before switching to Polydor.

Nightshift is the Commodores’ second album without Lionel Richie, who left the band in 1982, and their last album with their original bass guitarist Ronald LaPread. Their previous album Commodores 13 (1983) had featured interim lead vocalist Harold Hudson of Mean Machine. For Nightshift the Commodores permanently replaced Richie with British-born J.D. Nicholas, formerly of Heatwave. Dennis Lambert was chosen as producer, the Commodores hoping to find the same magic created by producer/arranger James Anthony Carmichael, with whom they had worked since 1974 and who was a major impetus in their earlier success.

5 Slip Of The Tongue

8 The Woman In My Life

9 Lightin’ Up The Night