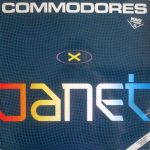 “Janet” is the second single by the Commodores  taken from their album Nightshift (1985). It reached #87 in the US Billboard and #90 in the UK Charts.

Nightshift is the 11th studio album by the Commodores, released by Motown Records on January 15, 1985. It was the group’s last album on the Motown label before switching to Polydor. Nightshift is the Commodores’ second album without Lionel Richie, who left the band in 1982, and their last album with their original bass guitarist Ronald LaPread. Their previous album […]