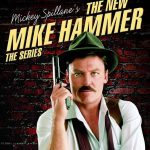 Mickey Spillane’s Mike Hammer (later titled The New Mike Hammer), with Stacy Keach in the title role, is an American crime drama television series that originally aired on CBS from January 28, 1984, to May 13, 1987. The series consisted of 51 episodes, 46 one hour episodes, a two part pilot episode (More Than Murder), and three TV Movies (Murder Me, Murder You, The Return of Mickey Spillane’s Mike Hammer, and Mike Hammer: Murder Takes All. Murder Me, Murder You was initially envisioned as a stand-alone TV movie, but ultimately became a backdoor pilot for the series when it was received positively by audiences).