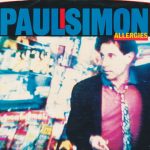 “Allergies” was the first single by Paul Simon from his album Hearts And Bones, it peaked at No. 44 in the U.S. Hot 100.

Hearts And Bones is the sixth solo album by Paul Simon. It was released in 1983. The album was originally intended to be called Think Too Much, however Mo Ostin, president of Warner Bros. Records, persuaded Simon to change it to Hearts and Bones. The album was written and recorded following the Simon and Garfunkel […]