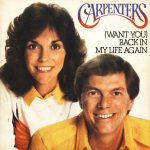 “(Want You) Back in My Life Again” is a song by the popular group the Carpenters, the second single off their album Made in America, released in 1981. The song reached #72 on the U.S. Billboard Hot 100. Its B-side was “Somebody’s Been Lyin'”, another song from the album.