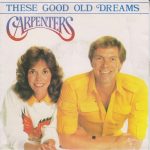 “Those Good Old Dreams” is a song by The Carpenters. Its B-side is “When It’s Gone (It’s Just Gone)”, a song released on the Made in America album in 1981.

The song talks of reliving dreams and feelings of romantic love held long ago (“It’s a new day for those good old dreams / One by one it seems they’re coming true”).