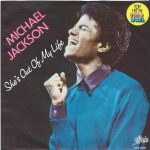 “She’s Out Of My Life” is a song written by American songwriter Tom Bahler and performed by American singer Michael Jackson. The song was released as the fourth single from Jackson’s 1979 album Off the Wall released on April 19, 1980. In 2004, the song appeared in The Ultimate Collection. It peaked at No. 10 on the Billboard Hot 100, marking the first time any solo artist had ever achieved four Top 10 hits from one album. In America, it earned a million-selling Gold 45. Unlike the album’s previous singles, which were all uptempo dance-oriented funk and disco songs, “She’s Out of My Life” was an emotional ballad. The song has a tempo of 66 beats per minute, making it one of Jackson’s slowest songs.