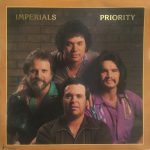 Priority is the 27th studio album by the Christian music group The Imperials, released in late 1980 on DaySpring Records. It is the second album that the group has collaborated with well-known musician/producer Michael Omartian, their first being their previous album One More Song for You (1979). In 1982, the Imperials won their fourth and, to date, final Grammy Award for Best Gospel Performance, Contemporary or Inspirational at the 24th Grammy Awards and at the 13th GMA Dove Awards, they were named Group of the Year and Priority was named Pop/Contemporary Album of the Year. Lead singer Russ Taff won his second Dove Award for Male Vocalist of the Year, winning back-to-back. Prior to the award ceremonies, Taff had left the group in 1981 to begin his solo career and started work on his debut album Walls of Glass (1983) before being replaced by Paul Smith as the new lead singer. Priority gave the Imperials their second number-one album on Billboard magazine’s Top Inspirational Albums chart.