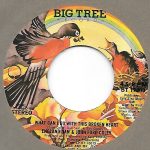 “What Can I Do with This Broken Heart” is the second single by England Dan & John Ford Coley taken from their album Dr Heckle & Mr Jive. It was released in 1979 and reached #50 in the US Billboard Charts.