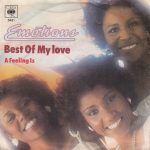 “Best Of My Love” is a song by American band The Emotions from their fourth studio album Rejoice (1977). It was composed by Maurice White and Al McKay of Earth, Wind & Fire, and produced by White and Clarence McDonald.

Released as the album’s lead single on June 9, 1977, the song topped both the US Billboard Hot 100 and US Billboard R&B charts. It also reached the Top 5 in the UK and Canada, the Top 10 in New Zealand, and the Top 20 in Australia.
“Best Of My Love” won a Grammy at the 20th Annual Grammy Awards (1977) for Best R&B Performance By A Duo Or Group With Vocals; it also won an American Music Award for Favourite Soul/R&B Single.

Rejoice is an album by American vocal group The Emotions issued in June 1977 by Columbia Records. The album reached No. 1 on the Billboard Top R&B Albums chart and No. 7 on the Billboard 200 chart. Rejoice has also been certified Platinum in the US by the RIAA. Tracks 1  Best Of My Love […]