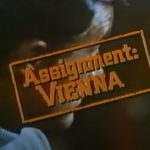 Assignment Vienna is an American drama television series aired in the United States by ABC as an element in its 1972-73 wheel series The Men. The series, created by Eric Bercovici and Jerry Ludwig, was made by Metro-Goldwyn-Mayer Television.

Assignment Vienna told the story of Jake Webster (Robert Conrad), an American expatriate in Vienna who was the operator of Jake’s Bar & Grill, an American-style establishment near the scenic heart of the city. In fact, the business was a cover for Jake’s actual reason for being in Vienna. He was involved in tracking down various spies and international criminals at the behest of U.S. intelligence, which apparently held something against him which, if disclosed, would have resulted in his being deported from Austria and apparently then incarcerated in the United States. Jake’s liaison with U.S. intelligence was a Major Caldwell (Charles Cioffi). Anton Diffring played Inspector Hoffman of the Vienna police.