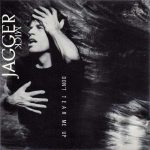 “Don’t Tear Me Up” is a single by Rolling Stones singes Mick Jagger from his album Wandering Spirit, released in 1993. It peaked at #86 in the UK Charts.

Wandering Spirit is the third solo album by Mick Jagger. Released in 1993, it was his only solo album release of the 1990s. Following The Rolling Stones’ Steel Wheels (1989), Jagger began writing new material for what would become Wandering Spirit. In January 1992, after landing Rick Rubin as co-producer, Jagger recorded the album in […]