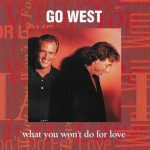 “What You Won’t Do for Love” is a song by American singer-songwriter Bobby Caldwell. It was released in September 1978 as the lead single from his eponymous debut album.  English pop duo Go West recorded a version on their 1992 album Indian Summer that was released as a single.

After gaining a reputation in Miami clubs as a talented musician, Caldwell was signed to an exclusive contract with TK Records in 1978 by TK Records president Henry Stone. Heading to the studio, Caldwell recorded his first album, which was given a redo after Stone felt the album was good but “didn’t have a hit”. Caldwell returned to the studio and came up with the final product, which included “What You Won’t Do for Love”. The song’s horn arrangement was written and recorded by Miami arranger Mike Lewis. The song is in the key of F-sharp minor.

Caldwell wanted the song to be the sixth track on the album since he figured his debut album’s second track, “My Flame”, which featured him playing guitar, would be the hit. However, TK Records felt confident that “What You Won’t Do for Love” would be the breakout hit. When it was released to R&B radio, TK Records did their best to hide Caldwell’s racial identity, hoping not to alienate their predominantly Black audience. However, when Caldwell began making performances live on stage, demand only increased.

Indian Summer is the third album by the band Go West, released in 1992. It is their most successful album to date, selling over 4 million copies worldwide. Go West are an English pop duo, formed in 1982 by lead vocalist Peter Cox and rhythm guitarist and backing vocalist Richard Drummie. At the 1986 Brit […]