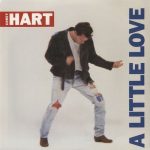 “A Little Love” is the first single and the only single by Corey Hart from the album Bang! that hit the US Billboard Charts. It peaked at #37.

Bang! is the fifth album by Corey Hart, released in 1990. It was his last album to chart in the U.S., reaching #134, and generated just one hit single, “A Little Love”, which reached #37. The track “Ballade for Nien Cheng” was inspired by Cheng’s memoir Life and Death in Shanghai. “Chase the Sun” is […]