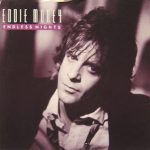 “Endless Nights” is a song by American rock singer Eddie Money, released in 1987 as the third single from his sixth studio album Can’t Hold Back (1986). It was written by John Cesario, Michele Collyer and Steve Mullen, and produced by Richie Zito and Money. It reached No. 21 on the Billboard Hot 100 and No. 10 on the Album Rock Tracks chart.

Can’t Hold Back is Eddie Money‘s sixth album, released in 1986. It contains one of Money’s biggest hits, “Take Me Home Tonight” which helped bring both himself and Ronnie Spector back to the spotlight. The album was certified platinum in 1987. The song “Stranger in a Strange Land” written by Money with Henry Small and […]