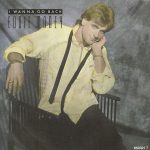 “I Wanna Go Back” is a 1984 song by American rock band Billy Satellite, written by band members Monty Byrom, Danny Chauncey, and Ira Walker, that achieved major popularity when recorded by Eddie Money in 1986. Another version was recorded by former Santana/Journey keyboardist/singer Gregg Rolie for his self-titled 1985 debut solo album.

American rock singer Eddie Money covered the song on his 1986 album Can’t Hold Back, and it was released as the follow-up single to the top-ten hit “Take Me Home Tonight”. It reached number 14 on the Billboard Hot 100, #33 Adult Contemporary, and number three on the Album Rock Tracks chart in early 1987.

Can’t Hold Back is Eddie Money‘s sixth album, released in 1986. It contains one of Money’s biggest hits, “Take Me Home Tonight” which helped bring both himself and Ronnie Spector back to the spotlight. The album was certified platinum in 1987. The song “Stranger in a Strange Land” written by Money with Henry Small and […]