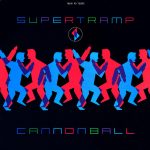 “Cannonball” is the opening track from Supertramp‘s 1985 album Brother Where You Bound.

“Cannonball” was written and sung by keyboardist Rick Davies entirely in the chord of G minor. Davies stated in an interview “I did it simply to see if it could be done”.

The lyrics to the song may have been seen as a veiled message to former member Roger Hodgson but Davies revealed in a French radio interview that they were inspired by a less than perfect concert promoter whom he refused to name.
The track became Supertramp’s last US Top 40 single to date, peaking at number 28 on the Billboard singles charts in July 1985. It also crossed over to the dance charts, peaking at number nine.
On the flip side of the 12-inch release is a 10-minute instrumental version of the song. Near the LP version’s fade-out, the brass play a citation of the Jazz tune Topsy.
The promo video was directed by Steve Barron and depicted a caveman who goes from his home to modern day Grand Junction, CO to see the band rehearsing the song on stage.

Brother Where You Bound is the eighth studio album by the English rock band Supertramp, released in 1985. It was their first album after original member Roger Hodgson left the band, leaving Rick Davies to handle the songwriting and singing on his own. The album features the group’s Top 30 hit “Cannonball”. Brother Where You […]