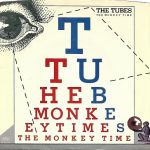 The Tubes released a version of the song as a single in 1983 which reached No. 16 on the U.S. rock chart and No. 68 on U.S. pop chart. It was featured on their album Outside Inside.

Outside Inside is a 1983 release on Capitol Records by The Tubes. The album was produced by David Foster. The Tubes had their biggest radio hit with the single “She’s a Beauty” (flipside of single was non-album track “When You’re Ready to Come”). Martha Davis from The Motels appears as a guest vocalist on “The […]