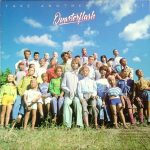 Take Another Picture is the second album by the band Quarterflash. It was released in 1983 by Geffen Records.

Quarterflash (previously stylized as QuarterFlash) is an American rock group formed in 1980 in Portland, Oregon. The band was originally made up of the two current members, Orinda Sue “Rindy” Ross (lead vocals and saxophone) and her husband Marv Ross (guitars), along with Jack Charles (guitars), Rick DiGiallonardo (keyboards/synthesizers), Rich Gooch (electric bass), and Brian David Willis (drums and percussion). Having a lead singer who also played the saxophone made Quarterflash notable. In a 1982 interview, Rindy Ross said that she viewed the saxophone as an extension of her voice, enabling her to express things she could not express with her voice alone

10 It All Becomes Clear