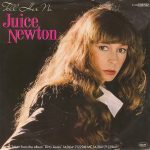 “Tell Her No” is a hit single written by Rod Argent and included by English rock band The Zombies on their eponymous debut album The Zombies in 1965. It peaked at No. 6 on the Billboard Hot 100 chart in the United States in March 1965 and was one of three big American hits by The Zombies (the others being “She’s Not There”, in 1964, and “Time of the Season”, in 1969). “Tell Her No” was only a minor hit for The Zombies in their native Britain, where it peaked at No. 42 on the UK Singles Chart in February 1965.

In 1983, Juice Newton scored a Billboard Top 40 hit in the United States with her version of the song.

Dirty Looks is the fifth solo album by the American country pop singer Juice Newton. It was released by Capitol Records in 1983. Dirty Looks was Newton’s follow-up to Juice (her “breakthrough” album) and Quiet Lies. Both had been major hits for Capitol and, between them, had produced six top ten singles. With their success, […]