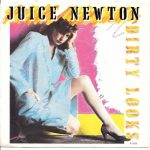 “Dirty Looks” is the second single by Juice Newton from the same titled album, releaed in 1983. It peaked at #90 in the US Billboard Charts.

Dirty Looks is the fifth solo album by the American country pop singer Juice Newton. It was released by Capitol Records in 1983. Dirty Looks was Newton’s follow-up to Juice (her “breakthrough” album) and Quiet Lies. Both had been major hits for Capitol and, between them, had produced six top ten singles. With their success, […]