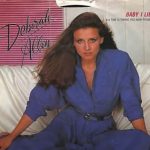 “Baby I Lied” is a song recorded by American country music artist Deborah Allen. It was released in August 1983 as the first single from the album Cheat the Night. The song reached number 4 on the Billboard Hot Country Singles & Tracks chart. It was also her only hit on the Billboard Hot 100, where it went to number 26. The song was written by Allen, Rafe VanHoy and Rory Bourke.

The B-side of the single, “Time is Taking You Away from Me” was written by Allen and VanHoy, and is a track that has not appeared on any subsequent albums.

Tracey Ullman recorded a cover of the song shortly after Allen released the song as a single.

Cheat The Night is an extended play by country pop singer Deborah Allen. Released in 1983 via RCA Records, the album includes the singles “Baby I Lied,” “I’ve Been Wrong Before,” and “I Hurt for You.” Although this has never been on CD, four of its six tracks (the singles and “Cheat the Night”) appeared […]