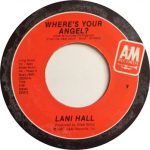 Where’s Your Angel? is a a single by Lani Hall taken from her album Blush. It was released in 1981 and peaked at #88 in the US Billboard Charts.