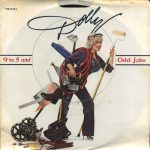 “9 to 5” is a song written and originally performed by American country music entertainer Dolly Parton for the 1980 comedy film of the same name. In addition to appearing on the film soundtrack, the song was the centerpiece of Parton’s album 9 to 5 and Odd Jobs, released in late 1980. The song was released as a single in November 1980.

The song garnered Parton an Academy Award nomination and four Grammy Award nominations, winning her the awards for Best Country Song and Best Country Vocal Performance, Female. For a time, the song became something of an anthem for office workers in the US, and in 2004, Parton’s song ranked at number 78 on American Film Institute’s ‘100 Years, 100 Songs’.

The song was accompanied by a music video that featured footage of Parton and her band performing, intercut with scenes from the film.