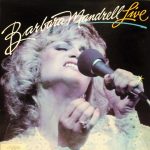 This album spawned two hit singles, “I Was Country When Country Wasn’t Cool” and “Wish You Were Here”. “I Was Country When Country Wasn’t Cool” became Mandrell’s signature song, and a return to her roots, peaking at #1 on the Billboard Country Singles chart in 1981. The song features an uncredited appearance by George Jones. “Wish You Were Here” peaked at #2 on the Billboard country charts, and also appeared on the (Billboard) Adult Contemporary charts, reaching #40. The album includes cover versions of popular songs, including “The Battle Hymn of the Republic” and the Hank Williams’ hit “Hey Good Lookin'”, and closes with a full-length vocal version of “Country Girl”, the theme song to Mandrell’s 1980-82 television show, Barbara Mandrell and the Mandrell Sisters.

This album was one of Mandrell’s biggest-selling albums in the United States, receiving a “Gold” certification by the RIAA, after the album moved 500,000 copies. It is only one of two albums by Mandrell that received a certification by the RIAA in the United States. The album peaked at #4 on the Billboard Top Country Albums chart (her highest peak position on that chart), as well as #86 on the Billboard 200. In Cashbox Magazine, both singles peaked at #1 and the album itself reached the top spot in November of 1981.

10   I Was Country When Country Wasn’t Cool