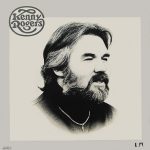 Kenny Rogers is the second studio album by Kenny Rogers from United Artists Records, released worldwide in 1977. The album marked his first major solo success following the minor success of Love Lifted Me in 1976.

The album produced two singles. The first single, 1976’s “Laura (What He’s Got That I Ain’t Got?)”, peaked at #19. This song was originally a #1 country hit for Leon Ashley in 1967. In 1977, Kenny gained stardom with the single “Lucille”, which climbed to the top of the country charts (both in the U.S. and Canada) and placing him squarely on the U.S. Hot 100 in the #5 position. It also blew open his solo career in the UK, reaching #1 there. Another track from the album is “I Wasn’t Man Enough” which makes appearances on some of Rogers’ greatest hits compilations in years to come.

The album reached No. 1 on the Country charts and ranked as high as #30 overall, and was certified Platinum in the U.S. (only reaching Gold in Canada).