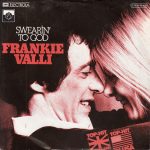 “Swearin’ To God” is a song written by Bob Crewe and Denny Randell. It was recorded by Frankie Valli and released in May 1975 as a single from his album Closeup. It is a love song whose lyrical hook is a more literal use of the expression “I swear to God” (i.e., “I mean this sincerely”): I’m swearin’ to God / So glad He’s givin’ me you

The first Valli song to incorporate the disco style (it runs four minutes as a single but just over ten minutes on the album), “Swearin’ to God” features Patti Austin singing a response to Valli’s praise in the bridge. “Swearin’ to God” hit number 6 on the U.S. Billboard charts and also charted #31 in the UK.

Closeup is an album by Frankie Valli, released in February 1975 on the Private Stock label. It had been seven years since his prior album, and afforded Valli his first of two number-one solo hits in the US (in addition to five as lead singer of The Four Seasons). The LP reached #51 on the […]