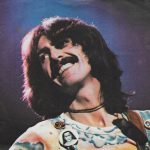 “You” is a song by English musician George Harrison, released as the opening track of his 1975 album Extra Texture (Read All About It). It was also the album’s lead single, becoming a top 20 hit in America and reaching number 9 in Canada. A 45-second instrumental portion of the song, titled “A Bit More of You”, appears on Extra Texture also, opening side two of the original LP format. Harrison wrote “You” in 1970 as a song for Ronnie Spector, formerly of the Ronettes, and wife of Harrison’s All Things Must Pass co-producer Phil Spector. The composition reflects Harrison’s admiration for 1960s American soul/R&B, particularly Motown.

Extra Texture (Read All About It) is the sixth studio album by English musician George Harrison, released on 22 September 1975. It was Harrison’s final album under his contract with Apple Records and EMI, and the last studio album issued by Apple. The release came nine months after his troubled 1974 North American tour with […]