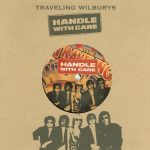 “Handle with Care” is a song by the British-American supergroup the Traveling Wilburys. It was released in October 1988 as their debut single and as the opening track of their album Traveling Wilburys Vol. 1. The song was the first recording made by the group, although it was originally intended as a bonus track on a European single by George Harrison. When he and Jeff Lynne presented the song to Harrison’s record company, the executives insisted it was too good for that purpose, a decision that resulted in the formation of the Wilburys. The song was written primarily by Harrison, although, as with all the tracks on Vol. 1, the writing credit lists all five members of the band: Harrison, Lynne, Bob Dylan, Roy Orbison and Tom Petty.

The Traveling Wilburys Vol. 1 is the debut studio album by the English-American supergroup Traveling Wilburys, comprising George Harrison, Jeff Lynne, Bob Dylan, Roy Orbison and Tom Petty. It was released in October 1988 to commercial success and critical acclaim. Although Harrison had long planned to start such a band, the project came about through […]