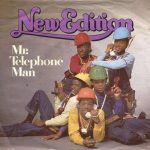 “Mr. Telephone Man” is a song by New Edition, and the second single from their eponymous second album, New Edition. Released as a single, by December 8, 1984, it was being added to the most “Hot Black” radio station playlists.

New Edition is the second studio album released by American quintet New Edition (Ronnie DeVoe, Bobby Brown, Ricky Bell, Michael Bivins and Ralph Tresvant) on July 6, 1984 in North America. It was their first album on MCA Records. It was also their first album without manager/producer Maurice Starr who would depart from the group […]