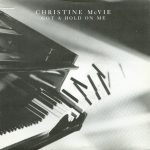 “Got A Hold On Me” is a 1984 song from Fleetwood Mac’s keyboardist and vocalist Christine McVie. It was the first single released off her second solo album.

The song rose to #10 on the Billboard Hot 100 chart, and it topped the Billboard Adult Contemporary and Rock Tracks charts for four and two weeks, respectively. This was McVie’s only top 10 solo hit in the United States.

Synthesizers on the track were played by Steve Winwood, while the guitars were played by Todd Sharp (the song’s co-writer) and McVie’s Fleetwood Mac bandmate Lindsey Buckingham. The other musicians were bassist George Hawkins and drummer-percussionist Steve Ferrone. Got a Hold on Me was released as the lead single from McVie’s self-titled 1984 solo album.

Christine McVie is the second solo album by the British Fleetwood Mac vocalist and keyboardist Christine McVie, released in 1984. It was McVie’s first solo recording since her 1970 self-titled release (under her maiden name). It features two U.S. top-40 hit singles, “Got a Hold on Me” (US#10) and “Love Will Show Us How” (US#30). […]