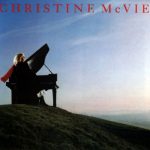 Christine McVie is the second solo album by the British Fleetwood Mac vocalist and keyboardist Christine McVie, released in 1984.

It was McVie’s first solo recording since her 1970 self-titled release (under her maiden name). It features two U.S. top-40 hit singles, “Got a Hold on Me” (US#10) and “Love Will Show Us How” (US#30). The album itself also achieved modest success in the United States, peaking at #26 and spending 23 weeks on the Billboard 200. In the UK, the album entered at #58 on chart.

Fleetwood Mac guitarist Lindsey Buckingham sings backing vocals on tracks 2, 7 & 10, plays guitar on tracks 3 and 6, and plays lead guitar on track 10. Mick Fleetwood plays drums on track 5. Eric Clapton plays lead guitar on “The Challenge,” and Steve Winwood shares lead vocals on “One in a Million” and contributes backing vocals and piano to “Ask Anybody,” as well as playing synthesizer on several tracks.

4 One In A Million