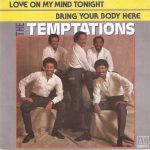 “Love On My Mind Tonight” is a single by The Temptations from their album Surface Thrills. It was written by Player singer Peter Beckett. It was the only single that hit the chart and peaked at #88.

Surface Thrills is the first of two 1983 albums released by the American R&B vocal group, the Temptations, on Motown Records’ Gordy label. In this album the group attempts to fuse their vocal harmonies with rock music production, resulting in a radical departure from the Temptations’ signature soul sound. It was produced by Dennis Lambert […]