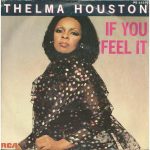 “If You Feel It” is a single by Thelma Houston taken from her album Never Gonna Be Another One, releases in 1981. It peaked at #48 in the UK Charts.

Never Gonna Be Another One is Thelma Houston‘s eleventh studio album, released in 1981. While the album did not make an impact on the pop charts, the album performed better in the urban and club/dance music markets. It includes the two major Hot Dance/Club Play chart hits, “If You Feel It” (#6) and “96 Tears” […]